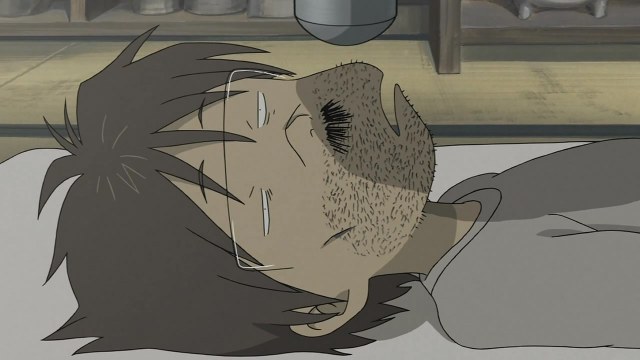 According to rumours on the net, anime bloggers participate in an annual Christmas tradition known as the Secret Santa anime review exchange. Organized by Reverse Thieves, anibloggers receive anonymous anime recommendations and take a chance on a series one would otherwise not watch.

It is also said that everyone who’s been recommended a title named Dennou Coil has given the show favourable reviews and recommends the show highly.

After managing to watch the entire series during NaNoWriMo of all times, I am no different. Dennou Coil is one of my favourite shows in the genre, and one of my favourite shows that I’ve watched this year. It seemingly blends sci-fi elements with the supernatural, while maintaining a manageable blend of light and heavy storytelling, resulting in a show that’s enjoyable by many for different reasons.

Daikoku City is the centre of a popular augmented reality fad among children. Yuko moves into Daikoku and joins her grandmother’s “agency” (essentially a kid’s club) for cyberinvestigation involving the use of virtual glasses and metatags. Nothing is as it seems, as another student new to school, also named Yuko, shakes up the balance of cyberspace power in the city with her prodigious hacking skills. Little do either realize the connection that exists between the both of them; the secrets behind the kids’ beloved hobby are deeper than they could ever imagine.

I’ve actually wanted to watch this show ever since it first aired in 2007, but I’ve always had reasons to put it off. When I received my anime secret santa selections, I was provided with an initial three options of Pandora Hearts, Summer Wars, and Howl’s Moving Castle. Having already watched the last two titles, and being unable to acquire a proper batch of Pandora Hearts, I ended up mulliganing into another set of shows: Dennou Coil, Gosick, and Absolute Boy. That title showed up again after so long, so I figured to give it a shot one more time.

I originally planned to watch the show after NaNoWriMo, but the show itself turned out to be such a great source of inspiration to my writing, primarily because of its world-building. The city of Daikoku is a mix of old and new; every corner and spot is rich in metadata, and a fearsome entity known as Satchi roams around acting like an antivirus for the cyberspace interspersed throughout. The kids are mischievous, especially with each other. The digital equivalent of harmless playground wars happens in augmented reality.

The first part of the show introduces the city of Daikoku and Yuko’s cyberinvestigation club, as well as its rivals in school. The characters themselves are childlike in spirit, but are highly competent in their abilities to navigate and manipulate the AR around them.

Yuuko Okonogi is the main character, and having moved into Daikoku at the beginning of the series, she’s thrust immediately into the children’s activities. She serves as the perspective character for the audience, and learns takes in her environment along with the audience. Once her backstory is revealed and integrated into the show’s darker developments, she becomes her own intriguing person.

Fumie Hashimoto is the stand-in leader of the cyberinvestigation agency, and is a competent female foil to the agency’s rival, the immature yet cyber-skilled Daichi Sawaguchi. They bicker and quarrel throughout the show, and even with the obvious romantic undertones between them, they still exude a cute chemistry between them.

Kenichi Harakawa is the inactive, but senior member of the cyberinvestigation agency, aloof throughout due to his tragic backstory involving a close friend who was killed due to a complication and a malfunction in the Dennou network. He is a plot-driving character, but his baggage doesn’t weigh down on the show’s mood too heavily. He comes off as an enigma, which is to his benefit.

Yuuko Amasawa is the antagonist of the series, a hacker whose skills with cybermanipulation far exceeds that of her peers. She is a badass action girl, whose magic with her AR glasses and metatags is like that of a digital magical girl. She was the driving force behind my development of my NaNoWriMo character, Saki Sasaki. She is somewhat of an anti-hero, and towards the end, works to exorcise her personal demons, both psychologically and even paranormally.

The first half of the series seeks to develop the dynamics between these characters as they engage in everyday activities in school and outside of it. However, the series truly kicks into gear in episode 12 and 13, when the once-innocent antics of playing around with illegal cyber-entities (aptly known as illegals) take on a more heavy tone. In episode 12, popularly known as the “beard episode,” the kids discover colonies of illegals spawning in the cyberspace on their chins and necks. It starts off in a playful, comedic development due to the evolution of the colonies in the same manner as human society, but it gets deeper when the colonies begin to engage in inter-beard ballistic warfare, resulting in colonial extinction.

It plays out rather comedically due to the personal attachment that each kid develops for their respective beard colonies; some of them even have deity-like relations and communications with their inhabitants. But when the despair of dermal war breaks out, the introspection that occurs the responses are heartfelt and appropriate for characters of their age.

In a way, the quality and development of this episode is a microcosm for the development of the series as a whole. We grow attached to these children, and are exposed to a romantically mischievous world of augmented cyberspace. But when the deeper themes and plot developments come out in the second half of the show, the emotional attachment to these characters help create an interesting contrast between the two types of moods present throughout.

It culminates into a finale that’s intensely spoileriffic, but really ties the connection between the main characters as well as form the big picture of the cyberspace in which they live. It’s a remarkable journey through a fascinating world with interesting characters who are as realistic as they are complex. I cannot recommend this show highly enough.